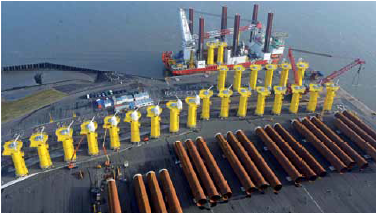 Cuxhaven positions itself as a hub for the offshore sector

The trend in the heavylift industry is toward ever larger pieces of cargo. For the German port of Cuxhaven this development has opened up new fields of business. The German shipping line Bremer Reederei E & B, which is the port agent for the hub, places special emphasis on projects for offshore wind farms.

The transition to renewable energy is one of the most important issues in Germany. For the city and port of Cuxhaven this is a convenient development. Together with Eemshaven (Netherlands) and Esbjerg (Denmark), the northern German hub has developed into one of the most important transhipment centres for cargo for the offshore sector. The port, which is currently serving as the base for two large-scale offshore projects, is well on its way to passing its trial by fire. The German shipping line Bremer Reederei E & B, which has served as the general agent for Eon’s Amrumbank West offshore wind farm since December 2013, is playing a key role in this development. The project is located in the North Sea, around 35 km west of Amrum and 38 km north of Helgoland. A total of 80 wind turbines will be installed for the project. The installation ship MPI Discovery is being used to build the wind farm, as well as other offshore projects. «We first went through a typical demob / remob phase,» explained Captain Arne Ehlers, the business partner who runs the company. That means that the technical systems in place for the previous project, the Humber Gateway off the northeastern coast of England, had to be deactivated first to prepare the ship for the new project.

Cuxhaven as a hub

Transportation started last December and is slated for completion by next autumn. Steel tubes, so-called monopiles, along with transition pieces, will be shipped to the wind farm via Cuxhaven. The pieces of cargo, which arrive from Belgium, are placed temporarily on a newly-built heavy-duty pier, using a mobile crane with a lifting capacity of 1,500 t, and are then sorted so that the MPI Discovery can load them with its own crane. The jack-up barge is loaded in Cuxhaven and shuttles regularly back and forth between the wind farm and the port to install the foundations at sea. The installation involves fixing the 60 m long monopiles 30 m deep into the seabed in water up to 24 m deep, and finally installing the transition pieces atop the piles.

Once in position, the ship lifts itself up out of the sea on six hydraulic jack-up legs, ensuring a stable position from which to carry out its crane and installation work. The foundation structure, made up of the monopile and the transition piece to the wind turbine tower, weighs about 900 t. The other project being carried out from Cuxhaven, in which Bremer Reederei E & B is the subagent, is the installation of four Siemens transformer platforms. From Cuxhaven the jack-up vessel GMS Endeavour is supported by the platform suppliers Blue Alpha and Blue Antaris, which supply the platforms with food, technical equipment and service technicians.

The direction of the trend in the heavylift industry is clear – dimensions are increasing in size. Infrastructure in many places is running up against its limits, however (see also page 73). It is increasingly common for project cargo to be too big to transport by barge these days, or for the weight of shipments to exceed the maximum weight capacity permitted, for example of motorway bridges and the like. This creates new business opportunities for seaports such as Cuxhaven, as they make assembly directly at the loading site more attractive for exporters.

Cuxhaven is responding to this development and wants to establish itself as the first choice for the export-dependent heavylift industry, based on its experience in transhipping offshore cargo. In pursuance of that goal, new logistics areas are being established, which will be available with effect from mid-2014, especially for offshore, heavylift as well as other project cargo. A 5.4 ha area can be used for loads with weights of up to 20 t per sqm. Antje Veregge

About Bremer Reederei E & B

The shipping line, which was founded in 1951, is headquartered in Bremen and has a branch office in Cuxhaven. It offers services in the areas of chartering, purchasing and sales, brokerage, warehousing, stevedoring, crewing and insurance. Bremer Reederei E & B operates six ships.